It was going to happen sooner or later, though when it did happen, I was pleasantly surprised.....


No, not that you perverts, I painted the first vehicle for my German force, a StuH 42. Probably my favourite of the German tank designs, yes the gun is in a low hull mount but the whole thing looks stubby and brutal.


One of the things keeping me from starting them was being unsure about how to apply a decent scheme without an airbrush, though that was soon solved by using a trick I found on youtube - firstly stippling the stripes on using a 50/50 mix of the stripe colour and the main colour, then using the stripe colour over the top to give a soft edged finish.


I've not added any weathering to this one for now as I wanted to get the paint recipe right before I start flinging mud and chipped paint everywhere. I think a bit of mud in the guts of the tracks and flicked up the side skirts should do the trick, while I'll probably keep any chips to heavy wear areas.


One of the things I'm pleased with and disgusted at in equal measure is the comment from my wife that it look like a shop bought paintjob, and in some respects she's right. I mean, everyone paints German armour and it all looks the same for the most part. What I need to do is work out how to make it mine. I think a few bits of stowage would help, as would taking panels out of the skirts. The rest of the tanks I've got built are all straight from the box jobs so I'll be going back over those in turn.

The next tank I've got on the desk is the StuH's up gunned daddy, the StuG Ausf H. I think I'll start on that while I've got the enthusiasm for armour going.

A jump back to World War 2 tonight as I finally decided it was time to get a few decent photos of my recently finished Waffen SS field guns.

These 3 gun teams took me about a year to get round to for a couple of reason. Firstly, I wanted to get the bulk of the infantry done first and secondly, Warlord's field guns have a reputation for being a pig to build. I'll be honest, they weren't fun but a few pins and some liberal application of super glue means they shouldn't be coming apart any time soon.

The crew are in a mix of field grey and SS camo (which I'll be glad to see the back of!) while the guns themselves were used as a test for a dunkelgelb coloured spray from Flames of War (I think it may have been changed since I picked the can up). It's made by Army Painter (who's sprays I tend to avoid) but it worked a treat. A quick wash/drybrush combo with some sponge chipping for weathering and that was that.

One thing of note is the bases. I was originally going to use some of the large oval bases by Renedra but found they were a bit too big for what I wanted. I remembered I had a bunch of ovals by Games Workshop and eyeballed the fit, between a couple of sizes for the different gun sizes I was onto a winner. They were used as templates to carve flat bases out of 3mm plasticard.

I've got an officer on my plate next for Bolt Action and the dunkelgelb spray I mentioned earlier may have been used to get something tank shaped prepared for the table......

It always happens. Come back to something with a bit of enthusiasm and then you can't do it for a while. That's why I didn't post anything the last week or so or get back to comments (apologies!), A couple of days after I last posted it was time to leave the paints and desk behind for a while and take some much needed time away with the wife.

We spent a week in Cornwall, right next to the sea. Loads of awesome stuff to see including a couple of castles, one of which gave me some awesome ideas for building some Dark Ages terrain but that's for another time.

Before we left though I did start on another character for my AoS Chaos force in the shape of a Sorcerer Lord. Again went with the chipped black and gold with a dark grey robe and some red as a spot colour. A couple of hours and some basing when we got back and he was good to go. 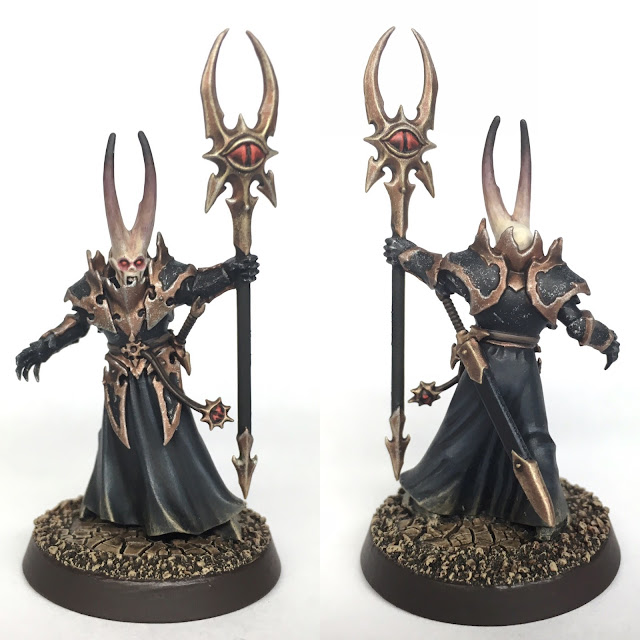 Still not sure what/if im going to use on the base with regards to grass or other elements so i'll leave that for now.


When we got back from our break I took delivery of a copy of Warhammer Quest: Silver Tower, at some stage that will get broken into for playing and adding the Tzeentch elements to the force. I may even pick up a few more of the monsters to expand the units.

One thing that it did get me doing first was looking at other heroes, particularly ones that could do double duty in my force. I've had a half painted Lord of Plagues (or the plastic Nurgle Lord given that when I started painting it, it had a square base!) sat waiting for finishing for a while so off the square base it came with a round in its place.

The flesh is going to go a bit lighter then bruised up with some glazing while the armour im in two minds about - go with the chipped black and gold of the rest of the characters or a more traditional Nurgle green? 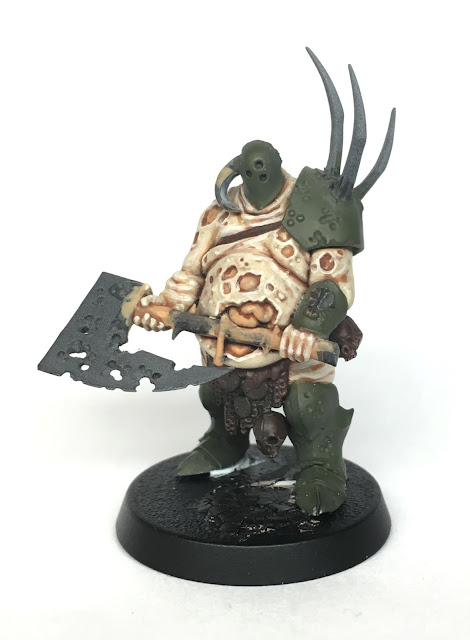 That'll be about it for today but with any luck I may have something else cooked up for the weekend.

I know I say it every time but one day it'll stick - time to give the blog another go. Nearly a whole two years this time, possibly a new record!

I've not painted a huge amount of 40k of late, after 7th ed came out I lost all desire to play with a bloated, convoluted rule set and set about looking for alternatives. I've still got my 30k project ongoing (Calth era Word Bearers) and a possible new Space Wolf force, but my main gaining focus is Bolt Action at the moment.

Since I've last posted the whirlwind that is Age of Sigmar has blown in and pissed a lot of people off and brought just as many people in. I've been on the sidelines and figured it was time to get involved so it was back to my Chaos forces with an Everchosen army. I've knocked up a test figure to get a rough idea of how I want them to look that I think works.

That's about all the rambling for now, hopefully next time there may be a bit more structure. 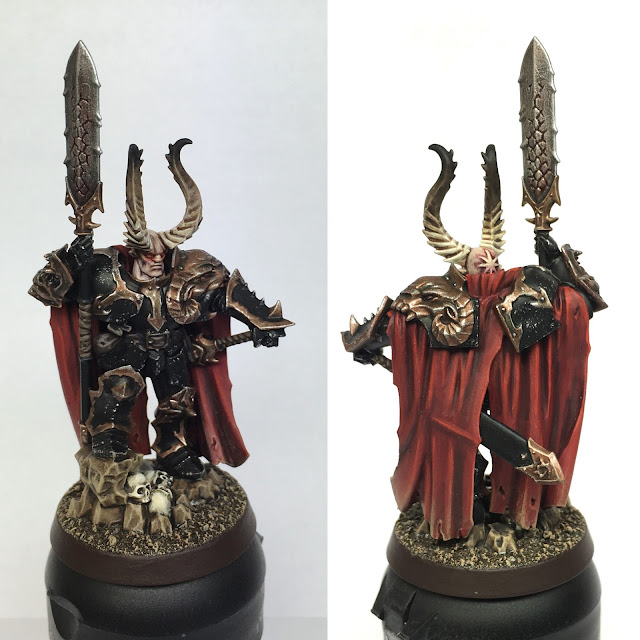 Had an eventful couple of weeks of late, i've ended up back at work for the first time since august, celebrated my 5th wedding anniversary and saw Nine Inch Nails for the 3rd time (spoiler, they fucking killed it).

That plus GW dropping 7th ed 40k makes for a pretty eventful few days. I'll leave the analysis of the rules to others better suited but with every edition I seem to be falling further out of love with 40k gaming, though i'll always come back to the figures and world. I've got too many army projects i'd like to see come to fruition to simply drop it right now. Most of my dice throwing comes from Bolt Action these days, and given that Warlord is working on Rick Priestley's new Sci-Fi game based on the Bolt Action mechanics, I can see that becoming one of my go to games in the future.

During that time I managed to finish up another 5 Death Guard Cataphractii and start working on the first HQ for the army, Typhon.

The Cataphractii are set up in a similar way to the previous unit (well, the first half of the unit as it's now 10 strong) with a plasma blaster, combi-plasma and a power fist in addition to the combi-bolters and power axes. Should make a mess of most things they come across. 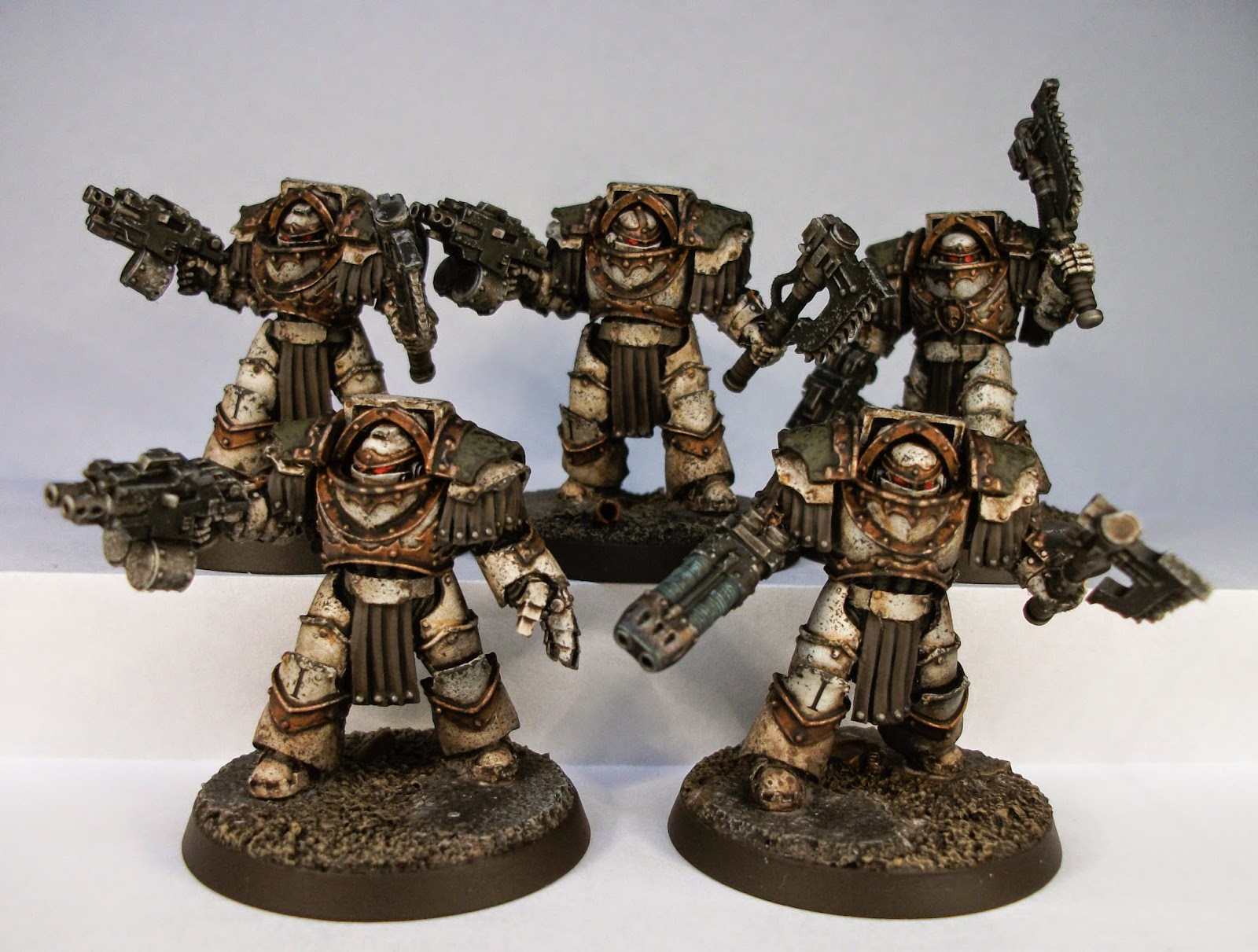 Seeing as i've made it this far without adding a HQ to the force, I figured it was about time. I wanted to add a cheap Master of Signal to add to the armies overall firepower but didn't have the energy to convert one up.

I did however, have Typhon sat in his box since he was released so though now was as good a time as any to work on him. I did manage to make a monumental cock up in tearing off the pipes that run from the top of his armour - as I was test fitting the left arm I pressed a little too hard, causing my thumb to skip over the top of the figure, shearing off all 6 of the tiny pipes. Not impressed at all. I wracked my brain trying to work out how to replace them (all 6 were lost in the carnage) but didn't want to risk cocking up even more so decided to leave the tanks smooth.

One last thing I did was to make up a new base for him, seeing as i'll be using him more as a gaming piece he'll be based in the same way as the rest of the force. More on that later. 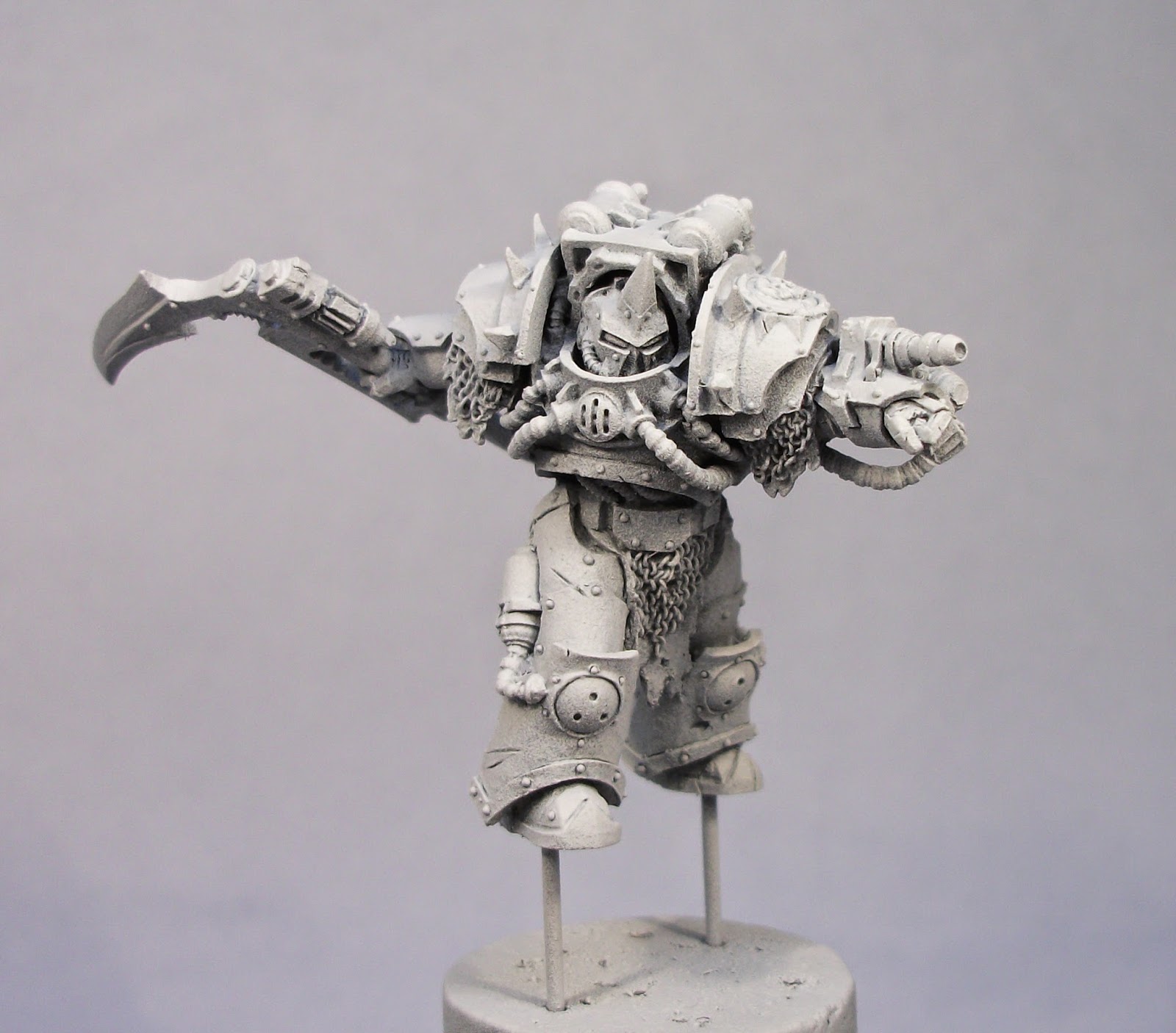 Next on the workbench will be a trio of Primarchs - i've got Mortarion to do for myself, and Mortarion and Horus to do for a client. I'll be adding pictures of all 3 as I work on them so stay tuned for those.....